“Dear Friends:
For close on to forty years now it has been my rare privilege
to serve the City of Denver and the State of Colorado
and the great Midwestern  territory as editor
and Publisher of th Colorado Statesman...
This publication , starting back when Denver
was only a thriving frontier community,
has lived to witness its growth into a metropolis,
noted for its unparallel development in education,
and cultural achievement, its high standards of religious life,
and the ideals of good government
maintained over a long period of years.”Î
This letter was dictated to Mr. Rivers’ wife, Richie Rivers who in turn, typed it for Mr. Rivers. Just because Mr. Rivers was going blind did not stop him from getting around.

According to William Rivers Greenwood, Sr. Mr. Rivers grandson, Joseph Daniel Dorsey Rivers would make his rounds to the State House and the City an County Building with the help of his grandson. Billy as he was known in the community would be the eyes and ears for his grandfather.

William R. Greenwood Sr. went on to say;
“It was my job to take my grandfather around on his route
to pick up all of the information from the State House
and the County Courts. Many summer afternoons
“Billy” remembers sitting on the front porch
of the house on 11th avenue half block west of Bannock Street,
and listening to his grandfather reminisce of better times gone by...”Ï

LATE SPRING - 1885 -
John L. Routt was the Mayor of Denver City, one of the fastest growing cities in the west in the 1880's. Dozens of cottages were springing up between Larimer Street and Champa Streets. At the time this was considered the suburbs.
On 20th street, #324, there was a young black lawyer getting ready to go to work.
Mr. Ed Hackley was an up and coming county clerk and recorder for the City and County of Denver, looking for a chance to make it on his own.
At 12th Avenue, #327, Joseph Daniel Dorsey Rivers had just arrived in Denver City from Hampton Virginia, hot and dusty, and looking for a bath and a job.
The first place Mr. Rivers went to was the county court house.
The only jobs for blacks in Denver were warehouse dock work for 50 cents a day, or being a janitor. Joseph Daniel Dorsey Rivers, and Ed Hackley met at the court house when Rivers was looking for a job. Young Mr. Rivers was very surprised to see a fellow African American(Negro) actually sitting down behind a desk with a shirt and tie on, not waiting on anyone, but adding up figures in a book.
Mr. Rivers struck up a conversation...
“Say can,  you tell me where an educated
fellow can fin a job like yours?”
Mr. Hackley looked up from his work.
“Ya, if ya happen to be a lawyer like me...”Ð

From that point on, Mr. Rivers and Hackley became very good friends.  Young Mr. Rivers and Hackley, later that day, discussed over a few beers each other’s dreams and goals.
They both hoped to become independent business men. Mr. Hackley agreed to keep an eye open for any good jobs around the court house for his new friend.
SUMMER - 1886 -
Note:
Joseph Daniel Dorsey Rivers, at this time, was already getting to be well known around town and at both the Denver City offices and the State House. He was successful introducing himself as Joseph D.D. Rivers. Soon there after, his friends and family just refereed to him as JDDR.
JDDR was still a resident of 327 12th avenue
Working odd jobs around town such as driving an ice wagon.Ñ
The Colorado Statesman annual picnic was held at Sloan Lake Amusement Park.
The years that Mr. Rivers ran his picnics were his most profitable years.
The Colorado Statesman picnic was the event of the day, which started a number of other Negro organizations, like the Masons, to also start large picnics for the community.
The Colorado Statesman readership doubled the first year they threw the picnic.

SUMMER - 1887 -
Joe E. Bates was the Mayor of Denver City.
Ed Hackley moved to 2033 Welton Street. True to his word, Ed Hackley helped lead his new friend to a job. JDDR finally got on as a janitor at the court house basement.Ò

This was a very good year for the Rivers family Richie and Joseph had raised enough money to build their very own home at 225 11th Avenue West, one block west of Bannock Street, a well known land mark in Denver City at this time. Their house stood there until it was demolished in 1995 to make room for a brand new high rise.

Winter - 1895 -
Ed Hackley owned a News Paper called “The Statesman- Exponent”
Ed H. Hackley changed the location of his newspaper from the
Club Building, #402 1725 Arapaho, to 1739 Arapaho Street.
Mr. Hackley re-named his paper “The Statesman-Exponent”.
By fall of 1896 Rivers bought out the other half of his friend
Mr. Hackley’s “StatesmanNewspaper.”
This cleared the way for Joseph Daniel Dorsey Rivers
to freely publish his own newspaper for the first time in his life.
January 1896,
Joseph Daniel Dorsey Rivers
published the first edition of:
“The  Colorado Statesman”Ó
Joseph Daniel Dorsey Rivers- “Forty Years from this date, who would have known of all of the good times, and bad times that will have gone by.” Mr. Rivers continues to thank his loyal supporter.

“The service which the Colorado Statesman has rendered
has been made a happy one through the generous, constant,
and consistent support which the newspaper has received from so many sources.
I can but take pride in the way in which the business concerns,
the private and public institutions, and the homes have received
the long series of unbroken weekly visits of
the newspaper which mine was the honor to publish.”

In and outside the Denver metropolitan area, “The Colorado Statesman”
was welcomed every Saturday. Joseph Daniel Dorsey Rivers,
Editor-in-Chief and Publisher, had the newspaper
ready and out on time for over forty years.
From 1896 to1936 the “Statesman”
Was avidly read by both the poor and wealthy subscribers.
From the paper itself:Ô

As business manager, Rivers collected a host of sponsors.
Their loyalty followed, as Mr. Rivers started his own paper.
One of my favorite ads is:

“FORD’S HAIR POMADE
Formerly known as “”OXONIZED OX MARROW”“
153 East Kinzie Street, Chicago, Ill.
AGENTS WANTED EVERYWHERE”Õ
The Colorado Statesman  entertained its readers with over seventy-five ads each week. Denver at this time was trying to get ready for the turn of the century.
The great 1900's were just around the corner.
The Colorado Statesman reflected the job and the anticipation of the turn of century in the Negro community. The “Statesman” was comfortably located at 2 Clayton Block (17th & Lawrence) until 1900 when Rivers moved to 1824 Curtis Street, Room 25. The ads not only included paid advertisers, but personals for the following rates:

Over the years, Rivers built up contacts with other news sources throughout the country. He traded articles with other black papers in the country.
By 1908 he was communicating with over thirty-five
other Negro publications, most out of the south.
These items would show up as “Race News.” in the Colorado Statesman.
Long before it was illegal for lawyers to advertise,
Joseph H .Stuart, lawyer, was advertising very week in Mr. Rivers Colorado Statesman.
Mr. Stuart’s offices were located in downtown Denver # 329 Kittrege Bldg.  If this was not enough, right above lawyer Stuart, Dr. E. L. Jalulkner was doing the same thing. 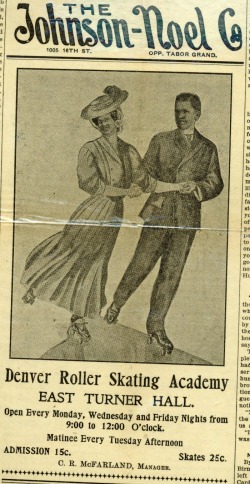 GJoseph Daniel Dorsey Rivers
Born February 12, 1856
or
1853 (no official record).
Washington DC
College: Graduate of Hampton Institute, Hampton Roads, Virginia.
Joseph Daniel Dorsey Rivers  moved to the great State of Colorado in 1881
The Colorado Statesman was purchased from Ed H. Hackley by Joseph Daniel Dorsey Rivers
in 1893 and Mr. Rivers became the sole owner of the “Denver Statesman”.
JDDR was well educated and wanted to be the editor of his own newspaper.
Late 1893 Mr. Rivers renamed the paper The Colorado Statesman He was the editor of the paper
for the next forty-five years.
The newspaper was located in a printing office located on the 25th floor of the office building
at 1824 Curtis Street. His influence was such that in 1921 was appointed Sargent-at-Arms of the State House of Representatives.
After 1930, Mr. Rivers began to lose his sight and would
dictate his editorial to his wife, Richie Rivers.

Joseph Daniel Dorsey Rivers and his family lived in their own home at 225 West 11th Avenue, near the present day location of the Denver Art Museum.

Joseph Daniel Dorsey Rivers died January 10, 1937 and was cremated on January 21, 1937.
Memorial service was held at Shorter A.M. E. Church.
His last request was to have his ashes spread at Conception Point at Red Rocks Park.
Today(2019) The Paper no longer is in publication.